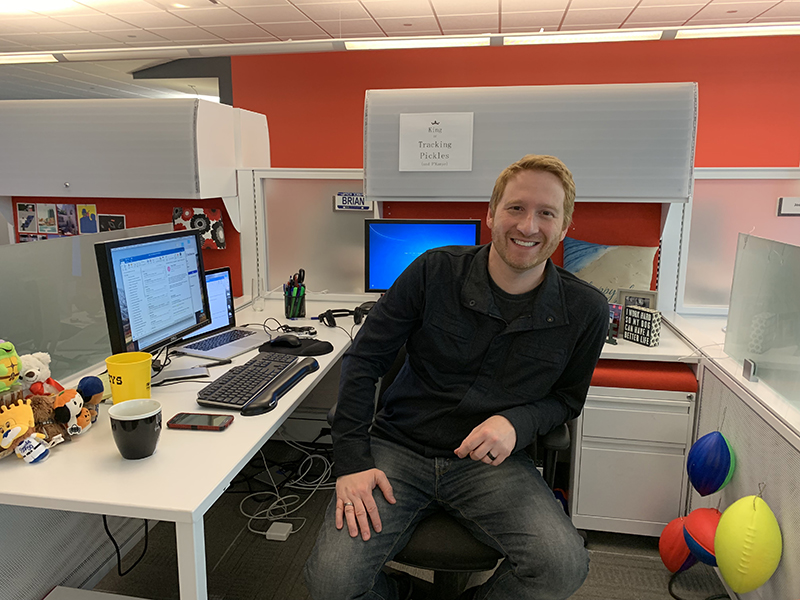 In honor of our 20th anniversary, we’re asking veteran Intouchers to reflect on what it’s been like to have worked with the company over the years. For this installment, we talked with campaign development developer Brian McQueen, who’s been with Intouch for nearly two decades.

Tell us about your first week at Intouch.
I was coming to Intouch practically straight out of college, so I’m sure I was nervous about screwing something up! I was maybe the 10th or 12th employee altogether, and we were enclosed in a small suite about the size of the Kansas City office’s third-floor café. We had no meeting rooms back then, so we either had to phone in from our desk or we had to borrow [Intouch CEO] Faruk’s office, which was oftentimes a stressful experience for me since he was frequently sitting at his desk during those meetings!

What is the most dramatic change you have witnessed during your time at Intouch?
Two things really stand out. The first was when we won business with a big-name client and realized we needed to “staff up.” We had somewhere between 30-50 employees at the time, and before too long, we ballooned up to 150 and have been adding new team members ever since!

The second big event was the opening of the offices in Chicago and then New York. Chicago was the biggie, though, because we were officially expanding into other cities!

What is the most exciting project you’ve worked on?
I don’t know if I can really point to one project over another, but something interesting that I can mention is that I’ve actually had four different careers —  all at Intouch. I started in account management before moving over to front-end development, then mobile development, and now I’m in analytics/campaign development. Getting a chance to re-invent myself every so often has been an exciting part of working here, and I’ve definitely appreciated the opportunity to continue growing and broadening my skillset! I also appreciate that Intouch has allowed me to move around a bit and try different things.

What’s the best thing about working at Intouch?
Absolutely my favorite thing would be the people here. I’ve been here ever since graduating college, and when I arrived, I didn’t know squat about the industry! Fortunately, I had some very patient teammates that helped guide me and turn me into a productive employee. A few of them are even still working here today! I’ve met and learned from so many talented people over the past 18 years. I’m quite fortunate to be able to say I’ve been at Intouch all this time!

Where do you see Intouch and the industry as a whole in 20 years?
It seems like the sky is the limit with us! In addition to Chicago and New York, we also have London and Boston offices now. We’re always evolving and improving what we can offer our clients, so I think the future is certainly exciting, and I’m looking forward to continuing my education and growing right along with Intouch!

With dozens and dozens of job available in all our U.S. offices, we’ve got room for more great Intouchers. Check out our jobs page to see which role is waiting for you!

Yes, We’re Serious — At Intouch, You Decide Where You Work

New year, new you – want more flexibility in your 2022? Remote employees cite many benefits associated with a work-from-home approach. Read on to learn about Intouch’s flexible policy and what makes it so successful.

Intouch Says Farewell to Three “Long-Haulers” – But First, A Q&A!

Before we let them go, we sat down to talk about what makes Intouch so special. Read on to find out what’s changed and what has, thankfully, stayed the same!

“Boomerangs” are employees who leave and then return to Intouch. Check out our Q&A with this senior director of media operations and find out why she came back.