Hispanic Heritage Month, which runs from September 15 to October 15, is a great time to celebrate and honor the cultures and contributions of the Americans whose ancestors came from Spain, Mexico, the Caribbean, and Central and South America. It’s also a great time to update your brand’s awareness of how well you’re reaching this key portion of our country.

Take a moment to ask yourself: How well do you understand the healthcare experiences of Hispanic consumers? What are the unique concerns of Hispanic audiences? What are their needs? How can your brand be of better assistance to them? Following are considerations pharma marketers should keep in mind when marketing to this audience.

Demographics
As of the 2020 census, the Hispanic/Latino population in the United States is now 62.1 million (or 18.5% of the country). This population has grown by 23% since 2010 – and that increase accounted for about half of the national population growth during that time. (The entire increase in the American population came from Hispanic/Latino, Asian, Black, and multiracial people. The non-Hispanic white population decreased for the first time on record, to 60.1% of the country.)

It’s worth noting – as the census did itself – that comparisons between 2010 and 2020 “should be made with caution, taking into account improvements we have made to the Hispanic origin and race questions and the ways we code what people tell us.” In addition to the improvements in data collection, changing norms may have affected the data as well. One example of a statistic that could reflect both: The number of Americans who identified as multiracial more than doubled in the past decade.

Terminology
According to Pew, over the past 15 years, here’s how Americans who identify as being part of these groups prefer to be referred to:

Preferred Language
Speaking of “speaking,” this also means leveling up with multilingual and multicultural communication.

According to the U.S. Department of Health and Human Services, Office of Minority Health, “Language fluency varies among Hispanic subgroups who reside within the mainland United States. Census 2019 data shows that 71.1 percent of Hispanics speak a language other than English at home: 70.4 percent of Mexicans, 58.9 percent of Puerto Ricans, 77.7 percent of Cubans, 86.2 percent of Central Americans. 28.4 percent of Hispanics state that they are not fluent in English.” 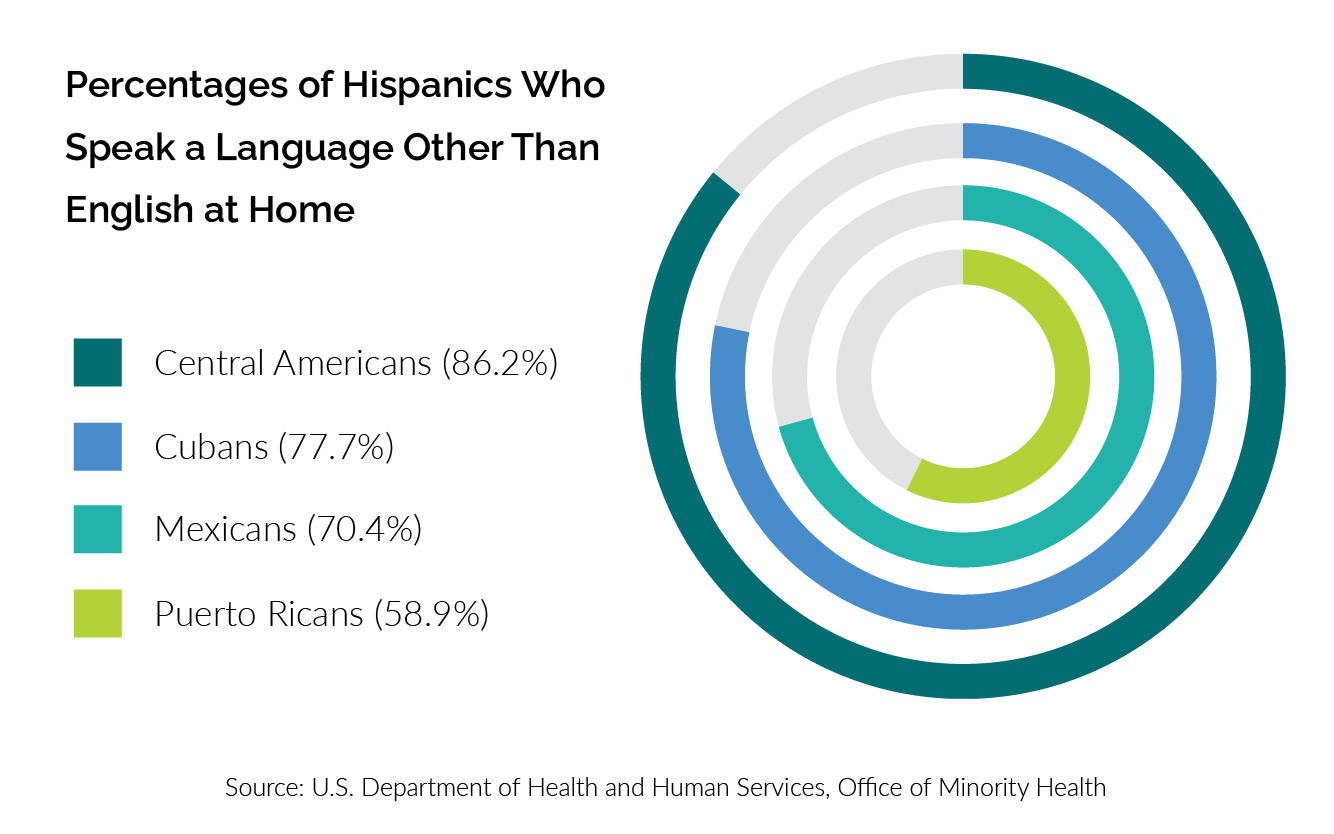 Language choices can’t be an afterthought, and an assumption that a simple translation is enough, isn’t enough. From inception, your brand strategy has to consider the approaches, concepts, and cultural touchstones that will help to convey the information you need to communicate.

It’s important to be aware, too, of the ways that being Hispanic can affect an American’s experience of the healthcare system. For example, Hispanic Americans have the highest uninsured rates of any racial or ethnic group – nearly three times as high as white Americans. There may be opportunities to create Hispanic-focused patient support programs to help facilitate access to the healthcare they need.

Unlike white American culture, family is at the center of everything in Hispanic culture, and decisions about healthcare are typically made after consulting with multiple close and extended family members. When thinking about marketing campaigns, think family-focused. Also keep in mind that, unlike Black patient groups, who have experienced systemic racism in healthcare, Hispanics often see doctors as trusted authorities whose opinions are not to be questioned.

Reach Hispanic Patients Where They Are
When pharma companies and their marketing teams aren’t located in areas with large, visible Hispanic populations, this important patient population can get left behind … out of sight, out of mind, if you will. A 2020 article from Fierce Pharma noted that in the United States, although Hispanic people make up only 18% of the population, they account for much larger proportions in cities like Los Angeles, Miami, San Antonio, and New York. In the same article, Jorge Daboub, EVP of local media sales at Spanish-language megalith Univision Communications, pointed out that although Univision’s viewers would welcome health and pharma information, Spanish-language TV is a “bit of a blind spot” for pharma companies.

With that said, it’s important to note that younger Hispanics are extremely plugged in (94%), compared with their older counterparts when it comes to mobile device use – meaning mobile as a channel cannot be ignored.

Final Thoughts
Who are we depicting in our websites, our commercials, and our materials? Does our creative truly speak to our audiences? And who is helping guide these decisions about communications, i.e., are there diverse voices at the table?

Pharma brands need to continue to push representation for minorities, especially Hispanics and multiracial individuals. It’s not enough to show a white patient and a black patient; there’s a spectrum of races to whom our communications need to appeal, and it’s the right time to reflect our society’s sophisticated diversity with equally sophisticated creative.

Our Hispanic patients, caregivers, and healthcare professionals are a sizeable, and increasing, proportion of today’s world. Understanding and addressing their needs, wants, and preferences accurately includes a greater focus and understanding on this important audience. Is your brand ready?

Show Your Work: Quantifying Impact to Communicate Your Marketing Strategy

In this POV, we explain a 5-step framework for making the best strategic decisions for your brand.

Timing Isn’t (Quite) Everything: How to Achieve Content Velocity

It doesn’t matter if you have the best ideas if nobody knows about them. But how do you gain visibility? Check out these four tips for pharma marketing success.

7 Tips for Integrating SMS Texts Into Your Brand Strategy

SMS messaging is an integral part of multichannel marketing capabilities, and it’s easier to activate and integrate across organizations and programs than you might think!